This book has been on my TBR since the time it was featured in The New Yorker in 2019.  I bought the Kindle edition recently and read it over 2-3 days. The author Esmé Weijun Wang is an American writer who has written the novel, The Border of Paradise (2016) and The Collected Schizophrenias (2019). She has received the Whiting Award and was named a Best Young American Novelist by Granta magazine.

Wang calls her book “the collected schizophrenias” to include all the diseases that go into this basket, including schizoaffective disorder, schizophrenia, and schizotypal personality disorder. Since she was into psychological research herself, her awareness about these matters was above average. The author says she even suggested to her therapist that her initial diagnosis of bipolar disorder might be erroneous. But her psychiatrist didn’t want to change her diagnosis since the prognosis for people with schizophrenia is rather bleak, and it is a far more severe disease. When the author began falling apart, she switched to a new therapist who changed her diagnosis to schizoaffective disorder. 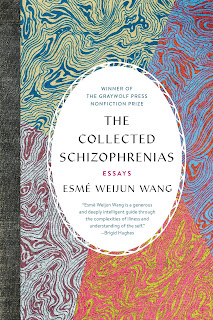 In her first chapter, “Diagnosis,” Wang starts by saying, “Schizophrenia terrifies. It is the archetypal disorder of lunacy.” These days, people are being more open about anxiety and depression, but those who have schizophrenia are still looked upon with suspicion. People with thought disorders operate on a wholly different level, one that a “normal” person or neurotypical cannot imagine or understand. Sometimes, people with schizophrenia “ have insight” into their delusions, which means that they can understand that what they are thinking is bizarre, but it is only medication that can help them deal with these symptoms.

Wang explains how a diagnosis, however bleak its outlook, gives new hope to the patient because he or she can then understand and accept what is happening. After all, there have been numerous people before who have experienced this illness. She quotes diagnoses from the DSM- 4 and 5 ( Diagnostic and Statistical Manual of Mental Disorders), which are versions of psychiatric manuals by the American Psychiatric Association or APA.

Wang discusses having explored Chinese medicine after consulting ‘Beyond Heaven and Earth: A Guide to Chinese Medicine’ by Harriet Beinfeld and Efrem Korngold, which talks of the Qi being off. She touches upon how some books like ‘Touched with fire: manic-depressive illness and the artistic temperament’ lead people to believe that a  diagnosis of bipolar disorder or schizophrenia is a gateway to artistic brilliance, which could prevent them from seeking treatment and medication. She expresses her concern over glamorizing these illnesses in unhealthy ways.

In her second story, “Toward a pathology of the possessed,” Wang discusses the rather disturbing story of a man with schizophrenia, Malcoum Tate, who was murdered by a family member who could not deal with his psychotic acts. She says, “ it is an extreme example of what happens when a family caring for a relative with schizophrenia feels that they have run out of options— that they have become overwhelmed by a force larger than themselves.”

In her third story “High-functioning”, she discusses how she used make-up and fashionable clothes as a veneer of sophistication, and, more importantly, “normalcy” and to differentiate from the ill-dressed patients. Also, the fact that she had gone to Yale put her closer to the high-functioning spectrum. The author discusses “A beautiful mind” by Sylvia Nasar and other works that highlight mental illnesses of gifted individuals.

Wang goes into great detail about what happened when she was studying at Yale and that she was sent home after two consecutive mental health-related hospitalizations. The committee, however, rejected her application for re-entry to Yale after she spent a year in recovery.

In her essay on ‘The choice of children,’ Wang explains how people with schizophrenia can pass on their genes to their children, and hence it is not advisable for them to procreate. However, she has briefly felt the urge to have children but made a conscious decision not to. The author has been married for 16 years, and she is rather proud of the marriage, which has lasted through her moods, upswings, low points, and the bumpy course of her mental illness graph. She talks about how she went to a camp meant for children with bipolar disorder and was the facilitator or camp counselor at this retreat. She discusses how she handled these children but notes that it is very different doing it for three days versus looking after them lifelong.

In the essay ‘On the Ward,’ she discusses her hospitalizations and the landmark expose, ‘Ten days in a madhouse’ by Nellie Bly.

In the  essay titled ‘The Slender Man, The Nothing, and Me’, she outlines another disturbing case of “how two twelve-year-olds Anissa Weier and Morgan Geyser conspired to kill Payton “Bella” Leutner, who was considered to be Morgan’s best friend.” Both were charged as adults, and both used the insanity defense. Anissa Weier was diagnosed with “a shared delusional disorder” or schizotypy, a milder form of schizophrenia. Morgan was diagnosed with schizophrenia. The author discusses how the girls spent hours on creepypasta wiki, which exacerbated their delusions and led to the planned murder.

In ‘Reality, on screen’, the author discusses the action-thriller sci-fi movie Lucy and how it affected her on a personal level since she got too immersed in the story.

In ‘John Doe, psychosis,’ the author talks about her PTSD and how that led to her developing a taste for horror fiction. She discusses a therapy called EDMR or Eye Movement Desensitization and Reprocessing used to treat the psychological consequences of trauma. She reveals a painful part of her life when she was in a sexually abusive relationship with a man. She later wondered if he was the same person as the one she saw listed as a sex offender in a video online. She went on to report this person.

In ‘Perdition Days,’ the author describes her experience with Cotard’s delusion, in which the patient believes they are dead. She has also experienced Capgras delusion, which leads the patient to conclude that doubles have replaced the person’s loved ones.

In ‘L’appel du vide’, the author talks of visiting artist Francesca Woodman’s retrospective. Woodman had died by suicide. In ‘Chimayo,’ she talks of visiting pilgrimage site, Chimayo. “Chimayo is a town with a population of 3170, and the El Santuario de Chimayo, which would be our destination, is a pilgrimage site where people pray for miracles, specifically miracles of healing.” She explains her Lyme disease in detail and how she considered converting to Catholicism.

In “Beyond the hedge,” the author talks about how “journaling and drawing divinatory cards had become routine parts” of her life when she was fighting psychosis. She discusses ‘Legion,’ a 2017 show based on a Marvel comic featuring David Haller as a man with schizophrenia, where the advertisements say “ he may be more than human.” She says “the lunacy as a superpower” narrative is a common theme in some fiction and Marvel comics where mental illness is a true metaphor for being special. The author also talks about undergoing a session “Beyond the hedge: Foundational Techniques for Embracing the Liminal,” which is about “three foundational techniques: using the body’s intuition, working with talismanic cords, and building relationships with allies and spirit guides.”

The problem I have with her narrative is how she discusses the people with schizophrenia who have committed murder and serious crimes. I don’t see how this helps lessen the stigma against the mentally ill. Most mentally ill people are likely to take their own lives rather than that of others, and hashtags such as #ImMentallyIllandIdontKill have been started to destigmatize the community. By going into great detail about people with schizophrenia who became killers, she is exacerbating the stigma perpetuated by Hollywood movies.

Along with being a part-memoir, this collection of essays delves into treatment methods and actual names of medicines and therapies. I recommend this book to caregivers of people with schizophrenia, and, of course, psychiatrists and mental health professionals, rather than to patients or the general public for the reasons cited above. I also recommend it to lawmakers and policymakers. However, the book does not indicate areas for future research into the field, and it is not a research-focused book per se. The author touches upon laws governing the mentally ill in the US, which could encourage policymakers to consider policy changes.

With anxiety and thought and mood disorders on the rise at present, it is necessary to build public awareness about various mental health issues so that timely interventions by qualified professionals can be sought.