My Book Review of 'Bitch Goddess for Dummies'

Recently, I attended a zoom session on chick lit by the Chennai Lockdown Literary Festival (CLLF). In the session, one of the speakers was Maya Sharma Sriram. I was so impressed with the way she conducted the session and answered the questions that I decided to pick up her chick lit novel, ‘Bitch Goddess for Dummies’ brought out by Rupa Publications in 2012. And I was not disappointed. I’m not sure if I was biased toward the book by the personality I had seen on zoom or not, but I quite enjoy chick lit and have read several chick lit novels in my thirties.

So the novel is about a 27-year-old woman Mira Iyer who decides to transform her personality from good girl to ‘bitch goddess’ to deal with the people in her life. Her mom who is constantly trying to fix her up with some eligible guy so that she can get married and Sanya, the real office bitch who is always cosying up to their bosses and vying for a promotion, are just two of the people in her life causing her angst. So it’s goodbye good girl and hello bitch goddess! Mira actually even googles how to become a bitch goddess and has a complete wardrobe makeover as well. 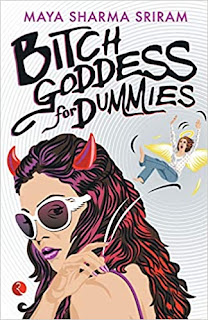 Mira’s troubled relationship with her absentee father is explored in detail and lends some depth to this novel. Right in the middle of the novel, Mira’s step sister makes an appearance and the rest of the novel is about how Mira lays some demons to rest by getting to know her dad’s second family, the one he created after leaving Mira and her mom.

In one part of the book, Mira says her life was beginning to look like one of those bad Tamil soap operas that her mom always watched, with a man having two families, step children and the works, but since I’ve never watched any of these soap operas, I didn’t see the parallels.

Set in Singapore and Singara Chennai and featuring a Tamil heroine, this chick lit novel has a protagonist that is a virgin at age twenty-seven.

Although, I found it strange that someone would try to woo a man just to prove she was a bitch goddess and take him away from another woman, I kept turning the pages to see how the story would turn out. Since it was witty and engaging, I suspended my sense of judgement and just read on. On the whole, I think lovers of chick lit will enjoy this one.