I bought Magical Women by Hachette India on Kindle a few days back. It had been on my TBR for a long time. However, I hadn’t read up on what kind of a collection of stories the book would contain. People who like weird stories, horror, dystopia and sci-fi might enjoy this collection, which has been edited by Sukanya Venkatraghavan. It was published in 2019.

The editor’s note states, “Each story in this collection is unique in its representation of what it means to be magical.”

It may not be everyone’s cup of tea. The book is well written, but some of the themes are a bit disturbing. The first story “ Gul” by Shreya Ila Anasuya has themes of lesbianism. The second story “ Gandaberunda” by S.V. Sujatha is violent and macabre. When I read the third story, ‘Rulebook for Creating a Universe’ by Tashan Mehta, I felt that although I was reading English, I was seeing Greek and Latin. It went totally above my head.

I really enjoyed the fourth story ‘The Demon Hunter’s Dilemma’ by Samhita Arni. It was almost like a fairy tale or mythological fiction with an underlying message of how some people don’t appreciate anything different from them and how true love overcomes all and changes your perspective.

The fifth story ‘Earth and Evolution Walk into a Bar’ by Sejal Mehta talks of the “rape of the natural world” and how humans have become monsters and the world has to be reset.

The sixth story, ‘Tridevi Turbulence’ by Trisha Das is a conversation between Ganga, Parvati, Lakshmi, Saraswati and the male Gods dominating their lives; only it is set in the modern day. 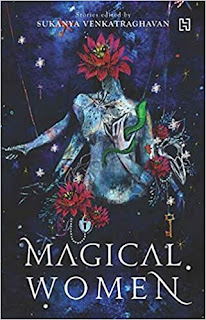 The seventh story ‘Stone Cold’ by Kiran Manral is a kind of a sci-fi, dystopian tale with a lesbian theme. It was high on storytelling.

The eighth story “The Gatekeeper’s Intern” by Ruchika Roy is about a protagonist who is clinically dead after a freak bolt of lightning strikes her car. The story discusses people with positive and negative charges and how they came to be. The author’s version of how the band ‘The Doors’ was created is inserted as a tiny nugget. The story touches on the supernatural and the line between life and death.

The ninth story ‘Grandma Garam’s Kitty Party’ by Shweta Taneja is about chudails who eat cats in kitty parties! One chudail is summoned by The Fetish Man who would like to tickle their feet. The chudail is struggling with her chudail legacy and wants to go “straight” and “work in an intellectual capacity, have a career, which doesn’t involve attracting men and scaring them witless and then unjuicing them”. She wants to be “normal”.

The tenth story ‘ The Carnival at the Edge of the Worlds’ by Shveta Thakrar is a highly descriptive story. It’s about a puppet, which plays Damayanti, ( of Nala and Damayanti fame)  that comes to life( much like Pinocchio). The protagonist goes from a puppeteer pulling her strings to her pulling her own strings. She is faced with a challenge — of facing her identity. She comes to life and finds out that being alive means constant agony and that everything comes at a price. If one wishes to know oneself, one must be ready to endure pain.

The tenth story ‘ The Rakshasi’s Rose Garden’ by Sukanya Venkatraghavan is one about a rakshasi who was gang-raped. She finds out that “rage was her magic” and that “she was all women”.  The secret behind her rose garden and missing memories is revealed at the end. This story reminded me of one of Neil D Silva’s stories that I read a few days back. (I don’t recall which one).

In the twelfth story ‘Bahameen’ by Asma Kazi, the protagonist time-jumps through her temporal lobe.  As she puts it, for a “time hopper, everywhere is home and nowhere is.”What caught my eye was the author sharing a recipe of ‘Nalli-nihari’ made of ingredients like “a pinch of existential angst to cancel all angst from Rastafariana”, “one heartbreak, your own”, among others. Although the bits about baby killers was macabre, I liked the time-hopping bits.

The thirteenth story called ‘The Girl who Haunted Death” by Nikita Deshpande was my favourite of the collection. It is about a woman’s relationship with Death (personified) after her husband passes away. It is the legend of Savitri retold.

The fourteenth and final story in this collection was “Apocalyptica” by Krishna Udayasankar. It was a story of gods and mortals. I found there was too much shoptalk about security codes when the author was discussing Vidya, and I lost the thread of the story there. Later on in the story, Parvati addresses Lord Shiva and includes the story of Ganesha.

On the whole, it is a unique collection, although one must have the palate for such stories.